The Woodville Bowling Club was formed in 1922.

A Group of interested residents under the leadership of Messrs George Evans and Frank Hansen approached the Chairman of the District of Woodville Institute with a list of 90 local signatures to give weight to a request for council assistance.

The Chairman at the time, Mr W Tulloch, helped to secure 20 acres of land for general recreational purposes, from the estate of Mrs E Davey; to be named the Woodville District Memorial Recreational Ground, on which the bowling club was established.

A group comprising of Z H Jones (later elected as first president), V H Ryan, J Bower, J D Symons, J E Nadebaun, J S Butler, J H Munroe, F Hansen and T Hawke were appointed to approach the then council requesting the 12 rinks be constructed at an estimated cost of £225 and that a club house estimated at £550 be built.  An agreement in regard to a lease was arranged and an overdraft of £600 was guaranteed by the council.

The actual work of laying out the first greens was carried out by the J Elleway at a cost of around £182 and E T Isely constructed the club house for around £544 .

Affiliation with the South Australian Bowls Association took place in that year, 1922, and the first pennant games were played in the 1923-24 season.

Mr Edward was the first greenkeeper at an annual cost of £200 and the first 20 inch mower owned by the club was £52 .

The depression years saw the club at low ebb when membership dwindled, but a levy of 10 shillings per member helped to correct the drift.
During the war years club members did much to raise funds for the provision of comforts and necessities for the fighting forces, and at that time the membership stood at 105.

In 1946 the club adopted the colours gum-leaf and gold as these were the colours of all sporting bodies throughout the district.

In 1949 the Woodville Women’s Bowling Club was formed with Mrs S Ellis as President, Mrs E Tobin as Secretary, and Mrs L Stokes as Treasurer.  The first major 1st division pennant was won in the 1949-50 season and congratulatory dinner was given by the mayor of Woodville Mr P M Ryan to mark the occasion.

In 1960 further extensions were made to the club house and a tender for the work of £2700 was accepted. 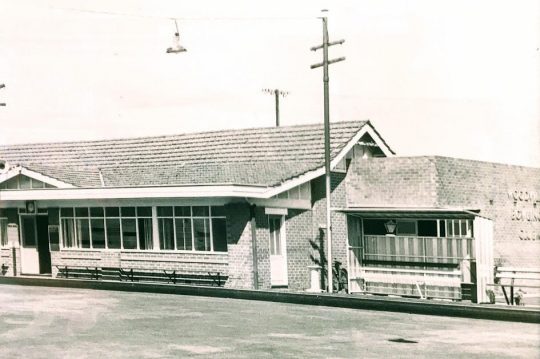 In 1973 the old club house was demolished and a repositioned new club house was erected at the cost of $100,000. The facilities included a spacious bar, bar lounge, locker rooms, kitchen and office with ample space for indoor bowls. It also allowed for events that call for the serving of meals on a large scale.

Facilities for the Women’s bowling club were also incorporated under the one roof with 25 rinks now available.

In 2006 the Constitution was updated to become one club under the management of a Board of Management consisting of 7 members. This was to conform to Bowls SA suggested plan for all clubs.

In 2018 the Woodville Council agreed to install two artificial greens and improve the storage sheds, paving and seating.  The club undertook extensive refurbishment of the shelters along the Northern side and with generous support from Lysaught installed a new sheltered walkway from Oval Avenue and new lighting.  Our C Green was retired and converted to tennis courts for the Woodville Orion Tennis Club.

The Woodville Bowling Club has been successful in bowling achievements and socially over the years and remains a strong local Club with excellent facilities.

Click here to have a look at some of our historic photos.